When Google announced their newly developed system programming language Go, I decided to give it a try on my Ubuntu machine, the Mac would have to wait. The installation was supposed to be a walk in the park, but it wasn’t. I realized I didn’t have some other essential tools installed, and encountered one problem after another, frantically googling for solutions. So in this post I’ll detail the step by step process to install and run Go on your Ubuntu machine.

Prior to installation you need to have these environment variables set up:

$GOROOT – The root of the Go tree. Typically this is $HOME/go but it can be any directory.

$GOOS – Name of the target operating system. Since this is Ubuntu the value would be ‘linux’

$GOARCH – Name of the target compilation architecture.  If you’re on a 32 bit x86 machine this would be ‘386’. Check out this section in Go online docs for other options.

$GOBIN – The location where binaries will be installed. You can set this to $HOME/bin or whatever path of your choice. Then you have to add this to your $PATH so that newly built Go-specific command such as the compiler can be found during the build.

Fire up the terminal and type the following command

This’ll open up the system-wide bash profile file in vi editor. You need to add the following lines at the end of the file.

Now add $GOBIN to your $PATH. Open .bashrc in your $HOME directory

and add the line

Google uses Mercurial to store Go source code, so you have to install it and fetch the repository.

Since 1.0, Mercurial has been installable by easy-install. So you need to get the python setuptools, header files and other essential  tools installed  first.

This part was quite confusing. Mercurial was throwing up some errors when I tried to clone Go’s repo.

The extension bisect is a built-in command since version 1.0 and so should not be used. If you get this error, open the configuration file(/etc/mercurial/hgrc.d/hgext) and remove/comment out the line hbisect=

Make sure the $GOROOT directory does not exist or is empty. Then check out the repository:

The Go tool chain is written in C. To build it, you need to have GCC, the standard C libraries, the parser generator Bison, make and the text editor ed installed.

Next, build Go from source

If all.bash runs without trouble, it’ll finish by printing

Where N is the number of bugs, changes from release to release.

You now have GO installed on your Ubuntu. Happy coding!

This morning I put on my system admin hat at work once again. The challenge was to setup a Rails development environment on our production server at the cloud and then deploy a Rails application on Apache.

This article is not really a tutorial, although it’s posted under How-to category. It’s more like a log of my actions in carrying out this task; the problems I faced and what I did to get around them, so that I can trace them back if I ever partake a similar task in future.

Rails have several deployment options and Phusion Passenger a.k.a. Mod Rails is the principle of them. It supports both Apache and the lightweight Nginx Server. Check out there documentation page.

Here’s how it went

passenger-install-apache2-module
Configured Apache 2 to load the mod_passenger module by adding these lines in /etc/httpd/conf/httpd.conf

cat /etc/httpd/logs/error_log
The last error was

Restarted Apache and went to http://rails.myserver.com again. The following error was showing on the page

no such file to load — sqlite3
Reason: SQLite3-Ruby Gem missing. Tried to install it

Installed SQLite3 by building in from source

If you are trying to find out what’s eating up your precious hard disk space in Windows XP/Vista, WinDirStat is your weapon of choice. A much helpful tool than the brain dead Explorer, WinDirStat analyzes the usage statistics of your hard drive/partition/directory and outputs(along with other data) a treemap, which is a visual representation of how blocks of data are organized on the disk. 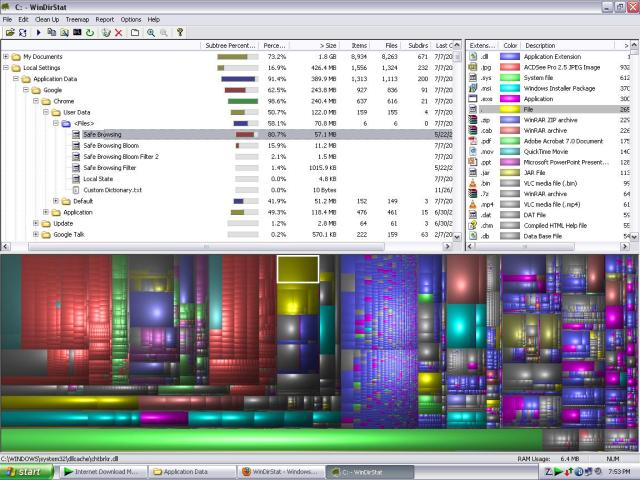 Clicking on a block shows you the file/directory physically taking up the space in the directory list(shown in the picture). Comes quite in handy. I just cleaned 1 Gigabytes worth of data cached by Safari 4. If it wasn’t for WinDirStat, I would’ve never known that Safari thinks your hard drive space is infinte! Who knows, may be Steve’s is really is?

Mod_python is a loadable Apache module which embeds the Python interpreter, so Python code can be run in-process by Apache. To deploy and run your Django application in an Apache web server you have to

In this post I’m going to share my experience on how to do all that on a Mac Mini that runs on OS X 10.5.

Here was my system configuration

1. Get the mod_python source

Check out the mod_python source code from the remote SVN repository*

*The reason I’m downloading the source from an SVN trunk and not from the Apache website, is because the source available at the later one isn’t properly patched for Mac Mini’s architecture. In my earlier attempts, when I downloaded and built mod_python from stable releases, Apache was failing to start whenever the mod_python module was being loaded using the LoadModule Directive.

3. Configure Apache to load mod_python when it starts

Add the following line to the file

Let’s suppose you have a Django app callled “mysite”. Copy you the directory to the Apache DocumentRoot

Add the following lines to the httpd.conf file

This’ll make Apache to route any requests under URL “/mysite” to the mod_python handler. It passes the value of DJANGO_SETTINGS_MODULE so mod_python knows which settings to use.

Now restart Apache and go to the site http://localhost/mysite

If it works then congratulations! You’ve just deployed your app on Apache!

If Apache fails to launch after you’ve installed and loaded mod_python, run it in debugging mode

Look for any error message printed in the terminal, copy it and google it. You may find a solution online.

You should also check out